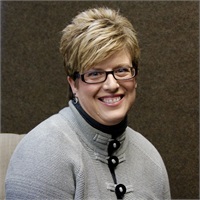 Mary Ann joined Providence Financial as an administrative assistant, and works tirelessly as our Director of Operations, with many years of experience working with customers.

The life and achievements of Providence’s Director of Operations Mary Ann Semkin are a testament to the dividends of life in a close-knit community. When at age 4 she needed experimental brain surgery, her hometown of Osceola, MO hosted “Mary Ann Day” and raised the funds to make it possible. The success of that operation propelled her into a life that has compounded Osceola’s generosity to her many times over.

Working many of her teenage summers as a counselor at Wonderland Camp in Rocky Mount, MO, she took responsibility for the daily care of campers with developmental disabilities and helped them live life to the fullest. Following her senior year at Clinton High School, she embarked on a 9-day tour of Europe before beginning her higher education at Rockhurst College in Kansas City. Once again displaying her love and eagerness to help others, she worked as a patient affairs coordinator for KU Medical Center while also filling volunteer responsibilities in Social Work and the burn unit.

Shortly after completing her bachelor’s degree in Psychology in 1996, she married Todd Semkin who had also recently completed his Master’s Degree in Vocational Counselling. Settling in Clinton, MO, MaryAnn managed the Clinton Senior Center organizing home delivered and onsite meals as well as the volunteer staff.

In 1997, they moved to Jefferson City where Todd began working for the Department of Elementary & Secondary Education in Vocational Rehabilitation and MaryAnn became a Customer Service Representative for Nationwide Retirement Solutions (PEBSCO), where she met Andy, who was the Director.

Upon the birth of their son Jackson in 2002, she began a stint as a full-time wife and mother. When Jackson entered school, Mary Ann accepted Andy’s invitation to join Providence Financial as an administrative assistant.